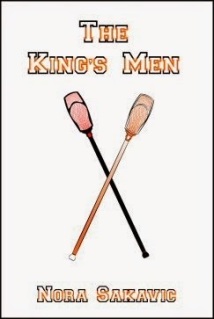 I knew I was going to have to write a series review from the moment I started reading The Foxhole Court. I had heard almost only positive things before starting it, and the few negative reviews I’d seen revolved around the fact that the sport elements in it weren’t realistic. To be honest I don’t care much for sports so I knew it wasn’t something that would bother me. Flash forward to after I read the whole series: I start seeing people that say negative things about it (sometimes without having even read it) that don’t make any sense to me, and (coincidence?) they are the same (or similar) things I’ve seen thrown at my other favorite series, Captive Prince. So I decided to make this post a little bit more than just a review because I feel like there are things that need to be addressed.

Please note that I’m not trying to shit on people’s opinions. Everyone is allowed to like or not like whatever they want. But. I see a trend of “opinions“, or to better put it: “reasons why I wouldn’t recommend this series” that I think is just harmful for these books, for these authors and for the people that enjoy them, and I find it problematic because it doesn’t take into consideration something fundamental to any written story: the fact that perspective is always key.

So, allow me to write a big fat disclaimer first:

I am in no way criticizing your opinion if you’ve read this series and you didn’t like it. Be it the characters, the story or the writing that didn’t appeal to you, I respect you and your opinion.

Also I need everybody who hasn’t read them to know that both series I’m talking about are ADULT series. Not YA.
With that out of the way, I want to address a few (just two really, because this post will be very long already) of the complaints that I’ve heard about both All for the Game and Captive Prince, often from people who haven’t read these series.

With this I don’t want to say that everyone should read it. There are strong trigger warnings for both series, so if that’s a problem for you, you should absolutely stay away from them. But should you denigrate these series based on the pure fact that bad things are said or done in them? I don’t think so.

I’m going to focus just on All for the Game now because that’s what I want to review today.
This series has awesome, realistic LGBT representation and is one of the best lessons in consent that I’ve ever read. I’m 24 and I’ve never read anything that takes consent more seriously than this. So allow me to be slightly pissed off when someone comes along and shits on its value, indirectly implying that it condones rape or the use of words like faggot.

I believe that we, as readers, should be able to understand that, allow me to repeat myself, perspective is key to reading any given book. End of rant.

But let’s come to the actual review for this.

The main character is Neil Josten, well, he has become Neil Josten. He had to change names and countries more than twenty times, because he’s been on the run with his mother for eight years, running away from a criminal father that is on the hunt to kill them both. And indeed, he did manage to kill Neil’s mother one year prior to the beginning of the story. So Neil is alone and lying low, with only one passion: playing Exy in his high school.
Exy is a fictional sport that I won’t even pretend to have understood completely. But hey, that’s entirely my fault because I don’t follow any team sport and I don’t care much for them. So here’s a description taken from the book for all of you sports lovers: “an evolved sort of lacrosse […] with the violence of ice hockey”. Whatever that means. (I promise I have understood a little bit of how it works. Just not enough that I can explain it to someone else.)
But high school is almost over, and he gets an offer to go to Palmetto State University and keep playing Exy there with the Foxes. He accepts.
Coach Wymack selects all of his players from problematic families or situations. He saw potential in Neil and understood Neil’s profile fits perfectly within this team, despite not knowing exactly what his past looks like.
As the story continues, Neil will learn the full truth about his past, who his father is involved with, how all that is somehow connected to Exy, and he will have to trust others with half or full truths and even put his safety in their hands.

Other things you can expect from the plot, in completely random order:

But, this wouldn’t be one of my favorite series if it wasn’t character-driven, so I need to talk a bit about the characters. The Foxes are divided in two friendship groups: the Upperclassmen (Matt, Dan, Renee, Allison, Seth) and Andrew’s group (Andrew and Aaron or “the monsters”, Nicky, Kevin). Neil learns gradually to get along with both groups in different ways. He obviously has trust issues and can’t reveal all of his past.
As I mentioned, Neil is not the only one with drama in his past. As we find out the Foxes’ backstories, we learn why they ended up in this wreck of a team, and I can guarantee you that each story is heartbreaking.

Besides Neil, my other favorite characters were Andrew and Nicky.
Nicky is “the talkative” one and is cousin to the twins Andrew and Aaron. He’s hilarious, supportive, and ultimately a really good person.
Andrew…I won’t lie and say that I understand him fully even after having read the whole series. I’ve stated in my review for book one that Andrew reminded me a bit of Ronan Lynch (from The Raven Boys). After having finished the series I don’t think that’s true anymore, but I’ve somehow still felt the need to associate him with other known characters while I was reading this. I don’t know why that is, probably him being just too complex. Another character I’ve tried to associate him with is Laurent from Captive Prince, but it just doesn’t do it. Andrew is his own character and doesn’t feel like a copy-paste of any other one.
I don’t agree with a lot of things he does, but his is one of the most fascinating characters I’ve met in my reader life, and I don’t necessarily feel like I need to agree with or understand a character in order to love him. And love him I do.

If you’re looking for romance, you should know that what you’ll find here is extremely slow burn. But it will eat your soul. You will cry at night thinking about it, you will listen to songs that remind you of the characters involved in the romance and start crying in the middle of the street because of how perfect the songs fit and you just hope the characters are doing okay. I wish I was just being overly dramatic. I wish.

I’m already planning a reread of this series (probably in January with some buddies) and I feel like it’s much needed, as it often happens in character-driven stories. I know I will understand a lot more than I did the first time around. That’s not to say the story wasn’t clear; on the contrary, the story was very clear, but some of these characters (not just Andrew) are too complex to fully appreciate them if you only read the books once. Besides, these fictional people aren’t planning to leave my head anytime soon, so I might as well dedicate my full attention to them again.

If you want to read my reviews for the single books you can do so here (warning: not all reviews are complete and I’m likely to go edit them often and probably not in a way that makes much sense at all):
–The Foxhole Court
–The Raven King
–The King’s Men

I really hope this series will gain more notoriety and recognition because it honestly deserves it all. I also hope Nora Sakavic will come up with some new books/series because I enjoyed her writing far more than it should be humanly possible.  Oh, have I mentioned this series only costs about 3€ in e-book format? Can it get any better than that? I don’t think so.

14 thoughts on “Discussion+Series Review: All for the Game by Nora Sakavic”